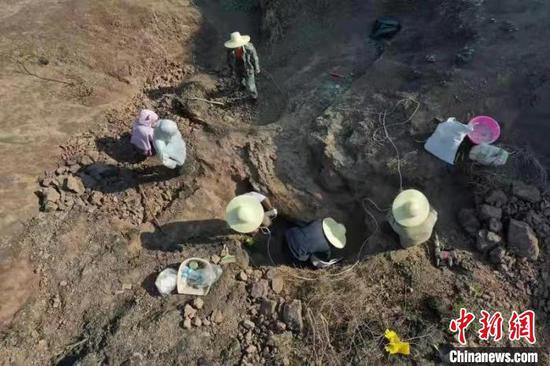 (ECNS) -- A 1.7-meter-long dinosaur larva fossil not belonging to any known genus has been unearthed from the Early Jurassic strata in Lufeng, Yunnan Province, according to Yunan University on Wednesday.

The dinosaur, with leaf-shaped teeth in the fossil, is believed to have been herbivorous.

This is the second time that sauropodiform dinosaur larva fossils have been found in the Early Jurassic strata of Lufeng. The unearthed fossils include part of the skull, complete cervical and dorsal vertebrate, metacarpal bones, as well as the distal femur and proximal tibia.

The specimen was in the early stage of ontogenesis, according to a bone histological study. Comparing it with other basal sauropodiform dinosaur larvae around the world, researchers believed it was about three years old.

Phylogenetic analysis also found that this specimen belonged in Massopoda but had more basal forms than sauropodomorphs. It did not belong to any known genus. But it had a distant evolutionary relationship with otherbasal sauropodiform dinosaur larvae, so the specimen may belong to some unknown basal sauropodiform genus.

The Center for Vertebrate Evolutionary Biology of Yunnan University and the Institute of Vertebrate Paleontology and Paleoanthropology of the Chinese Academy of Sciences have recently published related research results in Acta Geologica Sinica.