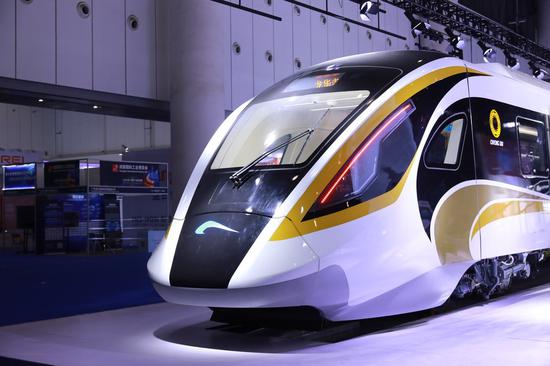 A new self-driving train made by Chinese train maker CRRC is decorated with elements of cultural relics from the Sanxingdui Ruins in Sichuan. (CRRC Changchun Railway Vehicles Co., Ltd./Handout via Xinhua)

A Chinese train maker has tailor-made a Sanxingdui-themed self-driving bullet train for Chengdu, capital of southwest China's Sichuan Province, to help the city cash in on the cultural travel rush.

The train by CRRC Changchun Railway Vehicles Co., Ltd. is decorated with elements of cultural relics from the Sanxingdui Ruins in Sichuan, such as bronze images of birds and golden masks.

Archaeologists announced in March that they found six new sacrificial pits and unearthed more than 500 items dating back about 3,000 years at the ruins in Guanghan, about 60 km away from Chengdu. These items are believed to belong to the Shu Kingdom, which dates back at least 4,800 years and lasted more than 2,000 years.

The train is made up of eight train cars that can carry 2,956 passengers. With a top speed of 160 km per hour, it will serve an urban transit network linking Chengdu's downtown with its satellite cities. Zhang Hongjun, a technician with CRRC Changchun based in northeast China's Jilin Province, said that the train boasts the company's most advanced self-driving technology. It can start, stop and return to the train depot on its own.

The train windows are display screens boosted with 5G technology. Passengers can use them to get online traffic information and watch live videos.

The discoveries at the Sanxingdui Ruins may have also played a role in the Beijing-Chengdu flight route seeing the largest rise in popularity among all routes on online travel service provider Qunar.com during the five-day May Day holiday that ended on Wednesday.